A PERSONAL WAY TO A SYLVAN & PASTORAL BUDDHISM

A LITTLE PLANT IN THE WIDE AND THICK ZEN FOREST
Seeds and Roots Orchestra: cultivating simplicity

The teaching of the Buddha is so simple:
when hungry, eat; when thirsty, drink;
when cold, wrap yourself in a good warm cloak.
Gudo Toshoku (1577-1661)

Fratus is developing an essential, wild and sylvan everyday buddhist experience he’s calling Buddismo Pastorale o agreste (Pastoral Buddhism) or Silvobuddismo (Silvo-Buddhism), acted and practiced in the Countryside, on the Mountains or in the Forests, not so far from other recent experiences already described in international essays such as Journeys on Mind Mountain (G. Bluestone), Winter Moon (B. M. Treace), EcoDharma (D. R. Loy) or Green Buddhism (S. Kaza), new variations of ancient buddhist attention about nature and mountains, but also vivid in the first foundating experiences in the Italian young zen movement, as for example in Scaramuccia (the rinzai school in Italy founded in 1973), La Stella del Mattino e Il Cerchio vuoto (founded by italian monks formed in the mythical Antai-ji temple) and in Fudenji monastery (a soto-shu long running community).

Fratus’ first reference in the newborning Zen in the Western Countries is the human experience of the japanese rinzai monk Nyogen Senzaki (1875-1958), lived in the U.S. as a common person for more than 50 years, teaching in a little “floating zendo”, before in San Francisco and after in Los Angeles. He considered himselves «a mushroom, without a very deep root, no brances, no flowers, and probably no seeds»; «a lone cloud floating freely inthe blue sky».

Another seminal zen master is Soen Nakagawa (1907-1984), a monk worked all life long to simplify his practice and monastic rules, who has said: «Meditation itself is not Zen. Zen is meditation, but it is also thinking, eating, drinking, sitting, standing, shitting, peeing – all of these are nothing else but zen… Zazen is sitting Zen. But this is not the Zen.» And what is it illumination? «There’s no end; no graduation. Even Buddha… is training, training, training… every day» (Source: Crazy Clouds. Zen Radicals, Rebels & Reformers by Perle Besserman and Manfred Steger, Shambhala, 1991).

Invited by festivals and institutions, Fratus leads meditations and poetry readings, seminars of “boschese” (woody and rooty language, writing laboratories), immersions in nature, opportunities to feed italian lay people interested in an intimate connection with the dimension of what we call Nature. Fratus gets form to a migrating refuge or hermitage he calls Seeds and Roots Orchestra, not a singular stable place but a series of occasions and situations.

You could listen “the Orchestra of Seeds and Roots, of Leaves and Barks“: practicing walk and meditation in forest, reading and composing poems, understanding notions about botanics and natural histories. It do exist an original or primordial root connecting all beings and forms of existence, every of us and Patriarches and Buddhas of History. We have to join it to be and to feel completely free.

Fratus sewed a sort of definition : Silvo-Eco buddhism – s. m. [from lat. selva, wood, from greek oikos, home, land, environment] – Practice of meditation in the woods, inspired by buddhist patriarches’ teachings and trainings; it considers exercises of seated meditation (zazen) and walking meditation, reading of classics and writing poems. It is preferably to make experience into the wild distant forests in the mountains, or in woods in the countryside, but it is possible also in arboretum and private or public city gardens.

A little Lake and Woods

The language of Wintering

Looking to the Blue Sky 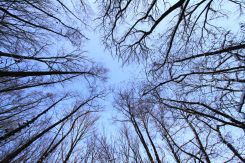 A Man who breath 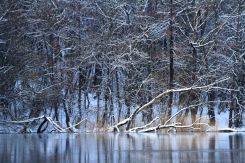 A good place for Zazen

Just human life: zen, nature and poetry’s roots mix together to create a language both concrete and imaginative. Everyday Fratus practices zen meditation. Everyday he learns from the teachings of eminent masters, in part of the Caodong / Soto lineage and in part of the Linji / Rinzai School. His main references are masters Eihei Dogen, Daito Kokushi and Yotaku Bankei, not forgetting the foundamental echoes of spiritual examples in Christian world, such as mystical saints, first Francescans, modern and contemporary hermits.

Fratus founded the Ne-an, or little (wandering) hermitage of roots, Eremo (tascabile) delle radici. For centuries monks and hermits practiced ascetic traditions in woods and mountains, a way sometimes called shugyō-an (shugyō, practice and an, hermitage, 庵), from which the inspiration of the name, Ne-an (根, ne, root, and 庵, an, hermitage).

Composed of earth and trees and water, nature knows not how to lie.
It demonstrates to us the universal thuth of reaping what you sow.

Ne-an is a pocket-size place, sometimes migrant, sometimes permanent. Sometimes Fratus meditates into forests, sometimes in a studio. As we are learning, recent Covid-19 Disease paralyzes human freedom. Waiting to go back in forests, Fratus identified a personal Sequoia-Buddha in a section of an old Monumental Italian Tree, a Giant Sequoia lived for 125 years (1890-2013) in the city of Merano. A new spiritual life for this piece of wood.

Along these years of pandemic, Tiziano Fratus has dedicated a lot of time in his little hermitage meditating and reading stories of Zen Patriarches. A colletions of notes, miniated forests, quotes and sermons, rooty and leafy notebooks dedicated to the intertwining between nature / woods / trees / streams / lakes, zen practice and history, a spiritual path for silvatic souls will be collected in a new book, Sutra of the Trees – Sutra degli alberi that will be published in Italy by Piano B. At the same time readers could access to The Forest Weaver – Il tessitore di foreste, a selection of 53 poems in a shade of seed, leaves and trees published by Hermitage Editions / Edizioni dell’Eremo. Good meditations!
>>> The Forests Weaver (pdf)

«Nature and Zen are a ceaseless and constant falling in love, they are a coming back in being children every evening, as soon as you put your head on your pillow, and every morning as soon as your eyes are wide  open and you see the sunlight as if it were your first time, though with awareness  of the passing seasons» TF